There are four major data providers: Factual, Acxiom, Infogroup and Localeze. Their databases contain business information that search engines seek out to display for patients. This information is the basis of where many online citations come from. What exactly is a citation, you ask? Citations are when a business is mentioned somewhere online, and the more citations a practice has generated, the more likely their practice is to appear higher in search rankings.

The major data aggregators provide information that help businesses get found correctly on online resources such as:

These online resources are only a few of the sources that receive data from the data aggregators. Obviously sites like Google Maps, Facebook and Yellow Pages are crucial places to be listed for physicians that want to be found online. Physicians need to get their information correct with these data providers, or they risk not being found by potential patients.

Every business wants online visibility! Do you want to master SEO with all of the major data aggregators, and generate and as many practice citations as possible? I thought so.

What is a citation?

As mentioned above, a citation is simply anytime a business is mentioned somewhere online. Many people believe that citations are links to websites, but this isn’t necessarily true. Although a citation can be linked, they don’t have to contain a link to be considered a citation. To break it down further, let’s look at how citations can appear online:

Though any of these combinations is considered a citation, a citation is not considered to be complete unless it contains the company name, address and phone number (NAP). Practices who have their NAP data correct with the major data providers have a better chance of seeing their correct information appearing all across the web.

Citations can appear in a structured or unstructured manner, here’s how you can distinguish the difference between the two:

A structured citation is the most common type of citation, and usually the most detailed when consumers are looking for business information. People see structured business citations on business listing sites like Yellowpages, Yelp or TripAdvisor. In most cases, these citations contain the NAP for a practice, something patients are looking for in local search.

An unstructured citation can be found on random websites, blogs, event listings, job posting sites, government records or social media mentions. These are unstructured because they could be as simple as a company mention. Usually these citations don’t include a practices NAP data.

No matter how a citation appears, it has influence on the local search ranking in some way for a particular business. Data aggregators play an important role in getting a practice listed or found on many major websites.

The importance of building citations

Citations have a major influence on local search rankings. Basically, the more times a practice or physician is mentioned online, the better chance their practice has to rank near the top of local search.

Google’s search ranking algorithm has many moving parts, which means that citation building isn’t the only thing a business has to do in order to rank on search engines. Online reviews, mobile compatibility, domain authority and keyword density are just a few other factors that influence local search.

So what do data aggregators do? 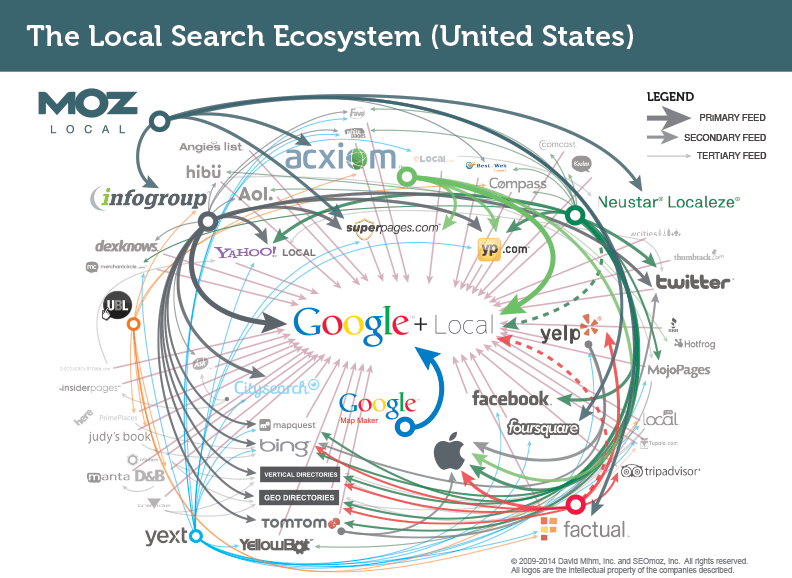 There you see the four major data aggregators: Infogroup, Acxiom, Localeze, and Factual. As you can see, many major directories and listings sites rely on these data providers for their information. Like we mentioned earlier, the data aggregators are the foundation of what builds structured citations on major sites.

Although the picture might seem like a lot to comprehend, the underlying message that you should take away from this is really simple: get business data right with the major data aggregators.

Incorrect data on any of these aggregators could mean that a practices information online is extremely inconsistent or down right wrong on many major listings sites and directories. Inconsistent information hurts SEO, so be sure to have your practice correctly listed with all the major players.

Not only does inconsistency hurt search engine ranking, but it hurts a DPC practice. Consumers don’t trust businesses with inconsistent information online—73% of consumers lose trust in brands due to inaccurate local business listings

Business citations rely on the power of data aggregators! We see that data aggregators have a major influence on the amount of reputable sources that a business is cited on because they automatically input business data into various sources for a business. This means not having to manually plug in information into each and every business-relevant site on the worldwide web.

There is no secret that we are keeping from you, or a fancy trick to increasing online citations. It’s as simple as getting it right with the major data aggregators. Local search is a major deal for businesses, especially for small businesses like local Direct Primary Care practices. A physician could potentially force themselves into bankruptcy if their online visibility is non-existent.

Patients rely on the internet and search engines to interact with local physicians. According to Google, “four in five consumers use search engines to find products, services or experiences nearby.” These are searches for anything, from the best pizza in town to the fastest hair salon. Local search is what drives consumers to a business’s front door, and ultimately drives top-line revenue for local business.

Make sure that your practice gets it right, and isn’t missing from vital local search results. Start using data aggregator: it’s the first step in building accurate online citations and mastering local SEO.

Stay connected and up-to-date by following us on social media.